Flippy is a 22-year old extraterrestrial green male bear with yellow eyes. He wears dog tags around his neck and a green beret with checkered crest on his head. He is a retired veteran soldier in the Army. He fought in the Weaponized Animal Regiment (The W.A.R), and he has an obsession with making booby traps inspired by the Vietcong, as well as a flashback of his experience of being held captive by them (as seen in Easy For You to Sleigh). As he fought for years, he was promoted to the rank of sergeant. During the Internet and TV series, it is unknown if Flippy has retired from the Army or if they are simply in a time of peace, but he's still a war hero. Flippy rarely appears in the series, most likely due to his repetitive behavior in most of the episodes in which he appears. Flippy most likely has even more kills than Lumpy (who has 151+ kills in 92 episodes), since he has over 483 kills and has only appeared in 15 episodes so far. The kill ratio between Flippy and Lumpy is 4 1/3:1 59/92, respectively.

Flippy is the only character in the series to cause the deaths of other characters on purpose in every episode which he appears (the one exception being Autopsy Turvy (Double Whammy Part 2), where all of his kills happen by accident). He has a severe case of post traumatic stress disorder. Whenever he sees or hears something that reminds him of war (e.g., gunshot-like sounds,crackling campfires and ketchup), he goes insane and kills everyone around him and sometimes himself, believing that he is still in war. While insane, several physical features about him change: his eyes turn a different color, usually green or yellow, his voice changes from high and cute to low and downright evil, and his teeth become sharp. In the early Internet shorts, his teeth simply became crooked. In later episodes when he flips-out he blinks changing his pupils from normal pac-man pupils to round pupils, his irises remain blue (sometimes red), his voice deepens into an angry growl, and his teeth get sharp; there has even been an instance (Remains to be Seen) where his eyes became small, circular, with a light blue iris. If he is in his evil state, he (along with Lumpy, The Mole, Cro-Marmot,and Nutty's one eye) doesn't have Pac-Man shaped pupils. When he is flipped out, he is known as Evil Flippy, or in W.A.R. Journal as Fliqpy.

Although Flippy can be the most cruel and dangerous character in Happy Tree Friends, he is considered to be one of the most sociable and kindest of characters, when not flipped-out. This is proven in several episodes where he is seen doing social activities with some of the other characters such as going to the movies and playing hide and seek. In most of the episodes where he appears, he is shown as a friendly and social before he goes insane, or as many people say, "flipping-out" (thus his name). Additionally, when he "flips-out", he does not remember the bloody rampage that follows. However, in Double Whammy Part 1, (and possibly starting from Hear Today, Gone Tomorrow when he resists his evil side for the first time) he finally realizes his problem and goes to Lumpy the psychiatrist for answers. After three attempts to cure him, Lumpy fails. At the end of the episode Autopsy Turvy (Double Whammy Part 2), Flippy finally cures his post tramatic stress disorder, but is run over soon after by a chicken truck.

Flippy rarely dies in the series. When he does die, his deaths involve vehicles/machinery or explosions and he is almost always not flipped-out. He is also one of the most popular characters in the show.

He has his own action show called W.A.R. Journal, part of the Happy Tree Friends Action Series: Ka-Pow! show. According to the first episode, Flippy was originally not a particularly good soldier. He demonstrated an inability to throw his knife straight while under pressure, killed both of his teammates, hid in the carcass of one of his dead teammates in fear, and accidentally threw a slice of pizza at the enemy commander rather than his knife. He flips out for the very first time when he hides inside his comrade's dead body to not be killed by the Tiger Army. Most likely, the first time he flipped out, he did it because his consciousness needed to protect him, so his instinct told him to fight or flee, and he fought. He ended up losing his hands in a fight with the Tiger Commander, but he was apparently able to reattach them some time between the events of W.A.R. Journal and the regular Happy Tree Friends series (unless these episodes, like the regular Happy Tree Friends series, revert everything back to original at the start of each new episode). The only episodes that Flippy dies when he appears are Happy Trails Pt. 2: Jumping the Shark, Class Act (debatable), Remains to be Seen, Hear Today, Gone Tomorrow, Autopsy Turvy/Double Whammy Part 2 and Without A Hitch. That means that he survives Hide and Seek, This Is Your Knife, Flippin' Burgers, Keepin' it Reel, Party Animal, Double Whammy Part I, New Season Teaser, Out of Sight, Out of Mime, Easy For You to Sleigh, On My Mind, In Over Your Hedge and Operation: Tiger Bomb.

Flippy is a kind and sociable character in the series. Although, this changes when he "flips out". In his Flipped-out mode or when he turns into Fliqpy, he then becomes violent, aggressive, and a blood thirsty character. He only "flips out" when he hear or see things that is related to war such as knives, gun shots, blood, military equipment, blood, etc. 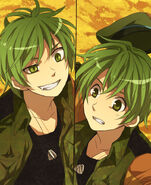 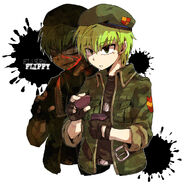 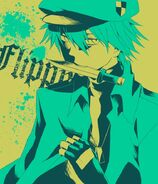 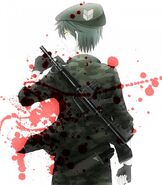 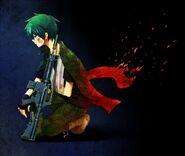 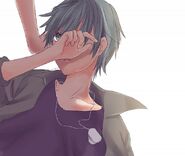 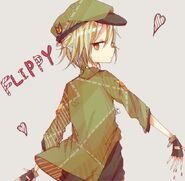 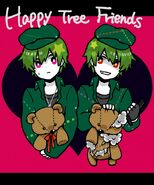 Add a photo to this gallery
Retrieved from "https://htfanimeversion.fandom.com/wiki/Flippy_/_Fliqpy?oldid=4999"
Community content is available under CC-BY-SA unless otherwise noted.